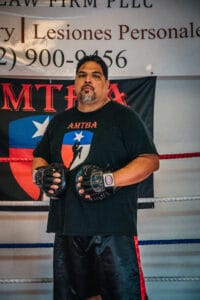 Frank is not only the head boxing instructor but was Jonathan’s Head Coach for his entire fight career. Frank has spent a lifetime around boxing and boxed while serving as a Marine in our united states armed forces.

After being wounded in battle Frank returned home to open his gym Submission Boxing Academy where he trained Kru Jonathan since 2006, as well as UFC fighters such as Justin Ladet, Roberto Sanchez, Juliana Lema, and many more. Now merging with Texas Muay Thai & Boxing Academy in the summer of 2020, the two plan to be a dominant force in today’s Martial Art scene.